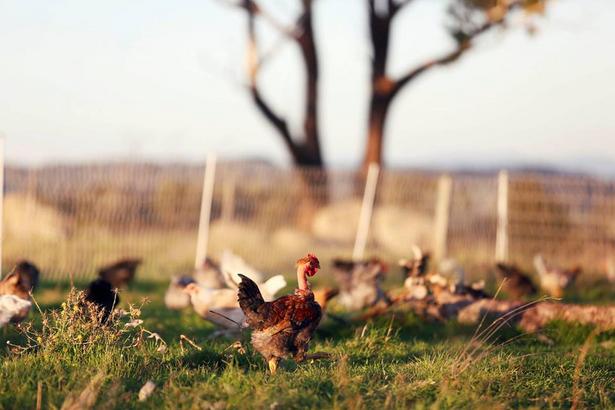 A poultry genetic project that began with a passion for animal welfare.

Since 2001 Michael Sommerlad has provided specialist advice to organic and free range pastured poultry producers. These producers have been working hard to address consumer concerns about welfare, but unlike international chicken farmers, who can choose to grow either fast or slower growing strains of meat chickens, Australian chicken farmers (whether conventional, RSPCA approved, free-range, organic or pasture-raised) have only had fast growing strains to grow.

The two imported commercial fast growing strains available in Australia are 'Ross' and 'Cobb'. These type of modern meat chickens are also referred to as broilers, and they have been selectively bred over many generations for intensive production environments. They now have the genetic potential to reach processing weight at 35 days, and the intensive industry geneticists continue to pursue even faster growth rates.

Whilst many could argue the benefits of these 'efficient', high-performance broilers, and how they are a testament to the enormous expertise employed by the breeding companies, mention should be made of the significant health and welfare concerns that have been associated with their fast growth rate: including 'ascites' (i.e. accumulation of fluid in the abdominal cavity), heart failure, joint problems and lameness.

Mention should also be made of the loss of genetic diversity that invariably accompanies the high levels of selection pressure necessary to achieve the gains in performance. There are two main aspects of this loss of diversity that has an effect on us all: modern broilers are known to have suppressed immune systems, which means their production environment may need to incorporate the use of medications, for example antibiotics, to ensure survival and growth. The other aspect is that of a limited gene pool. This means that, in the event of a new type of disease threat, a change in food type, or change in the environment, Australia's meat chicken industry may be vulnerable.

Lastly, it's important to mention the welfare concerns regarding the parent birds (also known as broiler breeders). These birds work tirelessly in the background of the meat chicken industry, but little is ever mentioned of them.

"The trouble is that the breeder chickens, the parents of the broilers, have the same stupendous appetites as their chicks. If you let a broiler breeder chicken eat everything she wants, she will become obese, her fertility will decline, and her life will be shortened. These chickens have to be kept on a strict diet just to maintain normal weight. They act miserable, and many of them develop stereotypies. These birds have low welfare no matter what you do. If you let them eat all they want, they have bad welfare and if you don’t let them eat all they want, they also have bad welfare. It’s terrible. The industry is going to have to breed parent stock with smaller appetites. There’s no other way to fix the problem”.

Is free range the solution?

Rearing fast growing broilers in a free-range environment does not make everything better. Even when given the opportunity to range outdoors, their huge appetite drives them to spend more time at the feed trough than foraging in the paddock, and their inherent health and welfare problems escalate when they are grown beyond the short life span for which they are specifically developed. There is also increased mortality rates during periods of hot weather, due to the excessive muscling and fat they carry around their breast and body cavity. This problem is exacerbated by the fact that a genuine free-range chicken house cannot have the same level of environmental control as housing used by the intensive industry, because genuine free range birds need easy and constant access to the range area.

Having worked with, and consulted to, some of Australia’s leading extensive chicken producers, Michael has observed the mortalities, including appalling mortalities experienced in summer due to heat stress, and believes there are three main ways to address the issues:

Can we just slow down their growth rate?

Free range and organic chicken farmers who rear fast growing broilers generally process them somewhere between 6 and 8 weeks of age (42 - 56 days). Presuming optimal management practices are in place, these strains of chicks cannot be slowed down any further than this without severe feed restriction. Deliberately slowing their growth rate, by adjusting either the quantity or nutritional quality of their feed to delay the time taken to reach processing weight can result in them suffering stress from chronic hunger.

The RSPCA in the United Kingdom only approves slower growing meat chicken strains under its Freedom Food scheme and makes this statement regarding 'breed' in their 'welfare standard for chickens':

"The RSPCA is concerned about the practice of deliberately slowing the growth rate of fast growing broilers by adjusting either the quality or quantity of their feed to delay the time taken to reach slaughter weight, as can be the case when rearing fast growing broilers in free-range systems." ​

Who else is talking about genetics and chicken welfare?

Dr. Temple Grandin, Professor of Animal Sciences at Colorado State University
…”Chickens have several serious welfare problems that come from bad genetics and can be fixed only with good genetics. The biggest problem in many intensively raised animals is pushing the animal’s biology for more and more production. Breeders choose the most productive animals — the fastest growing, the heaviest, the best egg layers, and so on — and selectively breed just those animals. Bad things always happen when an animal is over-selected for any single trait. Nature will give you a nasty surprise”...
Temple’s book “Animals Make Us Human: Creating the Best Life for Animals”, written with Catherine Johnson

The Australian Organic Standard and the RSPCA’s Meat Chicken Standard both mention the need for alternative meat chicken genetics:

"5.2.19. Selection of genetics shall be such as to conform to the principles and aims of organic production. This shall include preference for slower growing species for meat production and species which are able to perform their natural social and physical functions. As a guide, meat chicken species should be grown to a minimum age of 70 days. For the EU market, the minimum age at slaughter shall be 81 days….Where producers do not apply these minimum slaughter ages, they must use slow-growing strains."
The Australian Organic Standard

“The RSPCA is encouraging the chicken meat industry to look at breeding slower growing birds which will help improve bird welfare.”
​RSPCA Farming Facts - Life Cycle: Meat Chickens - What came first - the chicken or the egg?

​“Growth rate: The fast growth rate of commercial meat chickens can lead to physical and metabolic disorders, including leg problems, ascites and sudden death syndrome. Breeding companies should actively address the welfare issues associated with fast growth rate and chicks should be sourced from breeding farms/hatcheries that aim to produce healthy and robust birds.”

​The RSPCA Meat Chicken Standard - in regards to the sourcing and management of meat chicks.​

To this date, all RSPCA approved chicken in Australia are fast growing strains.

“The age of the bird matters. Commercial free-range chickens aren’t necessarily slaughtered later than broilers (35-55 days).  And the lifespan of organic chooks is only a little longer – the standards specify that organic meat chickens must be grown to maturity over a period of 63-80 days.  Unfortunately the longer the birds live the more likely they’ll suffer from bone and joint abnormalities. The breed of chicken can influence the quality and flavour of the meat.  In the past many different breeds were raised for meat. Now all commercial meat birds – broilers, free-range and organic alike – are from much the same fast-maturing genetic stock.  The free-range, organic and broiler birds from big producers are now so alike any differentiation and competition is dead, to the detriment of consumers, and ultimately the industry.  As one of our experts said of the industry, “They need to take a close look at themselves!"